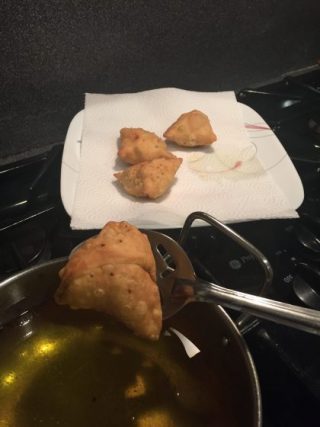 Have you tasted a samosa? You know… those triangle-shaped cones of flaky pastry filled with a spicy potato filling and deep fried until golden brown?

Is your mouth watering?

OK… let me rephrase the question. Have you ever wondered how samosas are made? How does the delicate dance between pastry and filling flow so that one crunch at a time leads to simultaneous explosions of tangy masalas, curried potatoes and buttery pastry.

Making samosas is a lot like creating a story. The final product will prevail if the shell is tough, the sides and edges are glued well and you spoon only as much filling as the samosa will hold.

Confused? Hop aboard folks! We’re going on a little trip…a cooking trip! You see, I don’t just eat samosas (something I’m highly qualified to do), I make ‘em too.

First you make the dough: scoop little balls of the dough between your fingers, flatten them and roll with a rolling pin. You’re aiming to shape each ball into a circle. If you’re a globe trotter and you’re aiming for another continent, that will do. but beware you’re going to want a cone-shape—so better stick to the circle!

The samosa shell is like the skeleton of your story. It must have a clear beginning, middle and end with succinct turning points for the main character. The strength of the shell is determined by how well you, the author, know your leading characters’ flaws, virtues and wounds. I’ve learned that all backstory makes for good story. But you should know how much to sprinkle and where (like the tiny ajwain seeds in the dough).

OK…doing good so far? Next slice the circle of dough down the middle so you have 2 semi-circles. Peel a semi-circle off the countertop, flatten on your palm, gently rub a little water on the straight edge and overlap one edge on the other and press down. Voila! You have a cone. (Why do I feel like I’m doing geometry here?)

If your characters are well fleshed and rounded, no matter which angle you dissect and examine them from (on the dissection table—ouch!) they will hold fort. This is because you’ve taken the time to know them inside out, get the dough of their personality to a right consistency and shape doesn’t matter because the fabric of your person will prevail.

Next, hold the cone in the left hand and spoon the filling in with the right, making sure the seam of your samosa shell doesn’t come apart. If it does, either there’s too much filling or the edges haven’t been glued and pressed together tightly enough.

Now the delicate dance of the fingers! Dip one finger in water again and run a stream of moisture along the upper edge of the cone. Then use another finger (try to avoid ‘giving the finger’) to pinch the upper edges together. Why not use the same finger, you ask? Well, if your index finger picked up masala during its little skating feat along the rim, chances are you’ll stain the samosa on the outside (when you’re pinching the edges together) and you’ll end up with a not-so-clean product.

Secondary characters are paramount to storytelling. Each character has its role and importance. But their functions are to reflect/mirror, contrast, ghost (highlight the past), serve as revenant (past issue in present time), serve as ally or opponent to the main character(s). Secondary characters can change course through the process of your story and that’s fine. By all means choose whomsoever / what ever finger you need. Remember each secondary character has a service to perform in direct relation to the main character. Try using one for the other and you might just end up with a messy product.

The final stage is deep-fry. The oil should be at mid-flame and hot. Too hot and your samosa will burn on impact. Not hot enough and the samosa will soak oil and languish (like a beached whale) until you turn up the heat. So temperature does matter. The medium flame allows the filling of the samosa and inner layer of the shell to cook. Flip the samosa with a spoon. Once both sides are half cooked, flip with a spoon again and jack up the flame a little because now you want the exterior to cook until golden brown.

Try immersing your characters in hot water—conflict—and watch their reaction. Can your main character take the heat? If not, how does s/he behave? Does he go into denial? Does he break down and cry? Does he hallucinate? Or does he stand up to the test? If he’s still standing, amp up the heat at the next turning point and make him work harder.

If your samosa’s filling is in place, the seams are locked and the character’s inner core is fully developed, when you flip over your samosa / your character, won’t fall apart at the seams and filling won’t ooze out (not a pretty picture). Your character will bob around in the hot oil, dance and sustain the heat of the moment. When you leave him to cool down, serve him to your readers, and when they sink their teeth in, I promise the crunch is one they’ll remember for life! 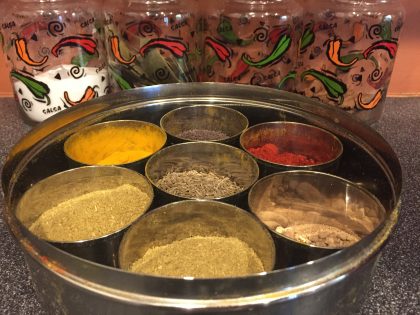 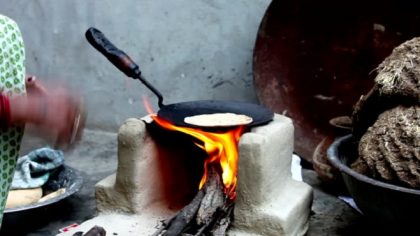 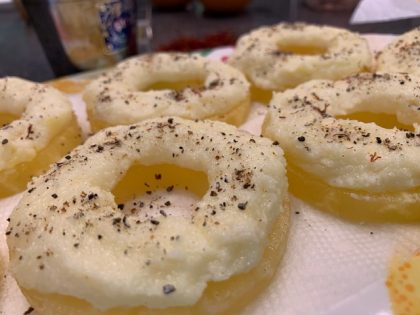 What’s Whey’n On Your Mind?